Three states are joining forces to create a regional hub to develop and produce hydrogen that will be used as a fuel and for manufacturing feedstock.

Govs. Kevin Stitt of Oklahoma, John Bel Edwards of Louisiana and Asa Hutchinson of Arkansas on March 10 announced the creation of the bipartisan partnership, which will help the trio compete for federal infrastructure investments funds.

The agreement seeks to promote that investment by prioritizing direct capture of carbon for all phases of low-carbon hydrogen development, and for producing and transporting the fuel. According to a news release, the states also will work with industry, transportation networks and ports to connect major facilities with high-carbon footprints to hydrogen infrastructure for fuel blending and reduction of CO2 emissions. All phases of industry that can use hydrogen as a fuel source are targeted. 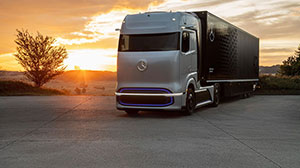 Freight, especially transported by trucks through Oklahoma’s central region and along major highway and interstate corridors — including I-35, I-40, I-44, I-235 and I-240 — is an important aspect of the hydrogen hub.

“Just like most of America, we’re not in the business of picking or choosing fuels, but they have to be economical,” said Jim Newport, CEO of the Oklahoma Trucking Association. “Obviously, trucking runs on a per-mile cost and so those costs — whatever the fuel source might be — are going to be relative.”

He added, “If you’re going to introduce a new fuel, try to encourage behavior to go that way and incentivize it with a tax break, then you need to be fair and equitable across the board so it is attractive enough to put into use.”

He said a hydrogen infrastructure must also be put in place.

“The chicken and the egg is both the technology of the fuel source and the availability of that fuel,” Newport added, noting that the tri-state partnership is part of a coalition approach that other states are considering.

Newport said his group at the request of the state’s Department of Transportation participated in the Oklahoma secretary of state’s recent hydrogen task force, which met extensively last year. OTA reminded that task force of previous tax incentives for other fuels such as compressed natural gas, including a weight exemption needed to carry heavier CNG tanks than current saddle tanks on traditional diesel trucks.

In the Oklahoma-Louisiana-Arkansas pact, the three states are “perfectly situated to demonstrate the entire value chain of hydrogen and uniquely situated to tackle the hard-to-decarbonize sectors like industrial, manufacturing and transportation,” according to the announcement.

In February, the U.S. Department of Energy announced two requests for information to collect stakeholder feedback to help shape the implementation and design of the regional hub and the electrolysis and hydrogen manufacturing and recycling programs. The goal is to help accelerate progress, reduce technology cost and ramp up the use of hydrogen as a clean energy carrier. Hydrogen is crucial to the DOE’s strategy for achieving Biden’s goal of a 100% clean electrical grid by 2035 and net-zero carbon emissions by 2050.

The U.S. produces 10 million metric tons of hydrogen annually, most of which comes from natural gas through steam methane reforming, according to DOE. Responses to the information requests were due at the end of March.