FMCSA says Camacho-Montoya, who held an expired Mexical CDL, was driving a commercial truck on Highway 55 in Eagle, Idaho, when, according to witnesses, he failed to stop at a red light at the intersections of Highways 55 and 44. His truck then crashed into another vehicle, fatally injuring its driver.

Following the crash, Camacho-Montoya agreed to submit to, and subsequently failed, three Standardized Field Sobriety Tests administered at the scene by the Idaho State Police. He then agreed at the crash scene to two breathalyzer tests.  The first test sample showed a breath alcohol content (BrAC) of 0.222; the second, 0.214.  Approximately four hours after the crash, at the Ada County Jail, Camacho-Montoya tested at 0.080, with a fourth showing at 0.078.

Possessing an alcohol concentration of greater than 0.04 while operating a commercial vehicle weighing more than 26,001 pounds and requiring a CDL is a violation of federal safety regulations.

The State of Idaho has charged Camacho-Montoya with felony aggravated driving under the influence and felony vehicle manslaughter.

A subsequent investigation by FMCSA personnel found that Camacho-Montoya, in the days leading up to the crash, on multiple occasions, had falsified his records-of-duty-status and had exceeded the allowable on-duty driving hours permitted by federal regulations.

[Related: The toughest states for hours of service violations]

The largest of the three recalls was issued by Volvo Trucks North America for an issue with the hubcaps on certain trucks. The recall affects approximately 1,050 model year 2021-2022 Volvo VNL, VNR, VHD and VAH models. In the affected trucks, the hubcap compression spring can cause the hubcap to separate, which could create a road hazard.

Volvo is still developing a remedy, NHTSA documents say, but in the interim, Volvo dealers will remove the hubcap for free. Owners can contact Volvo Trucks customer service at 1-800-528-6586 with recall number RVXX-2102. NHTSA’s recall number is 21V-417. 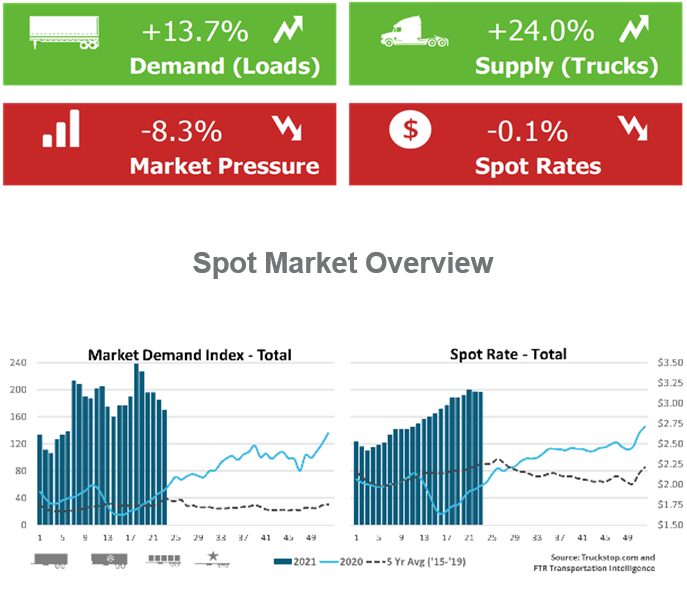 Spot market metrics in the last week | Both demand (in the form of posted loads) and supply (posted trucks) increased last week on Truckstop.com, during a week in which rates generally were steady for a broad average. The overall Market Demand Index (MDI), developed in a partnership between FTR Transportation Intelligence and Truckstop.com, fell 15.4 points on the outsize growth in posted trucks compared to loads. Fuel prices, also, generally were stable amid market pressure trending downward overall.

Arkansas DOT working to ease congestion on I-55
The Arkansas Department of Transportation is working with the city of West Memphis to ease the flow of traffic across the Interstate 55 bridge over the Mississippi River.

The bridge has seen increased traffic since the I-40 bridge over the river was shut down after a crack was found in a steel beam in May. Traffic has been diverted onto the I-55 bridge as an alternate route to cross the river.

As of last Wednesday, June 9, the following traffic pattern changes are in effect:

The plan is to reduce merging points which is anticipated to reduce conflicts and improve traffic flow.

Traffic will be controlled by traffic barrels and signage. The latest updates on the I-40 bridge closure can be found here.