How To Get From Athens To Crete (& Crete to Athens)

Many Greece travel itineraries include time in both Athens and Crete, respectively, the country’s ancient capital and its largest island. There’s plenty to see and do in Athens, as you probably already know, enough to fill several days.

However, a trip to Greece isn’t really complete without visiting at least one of the Greek Islands. So, if you’re trying to figure out how to get from Athens to Crete and possibly back from Crete to Athens as well, you’ll find the answers in this guide. 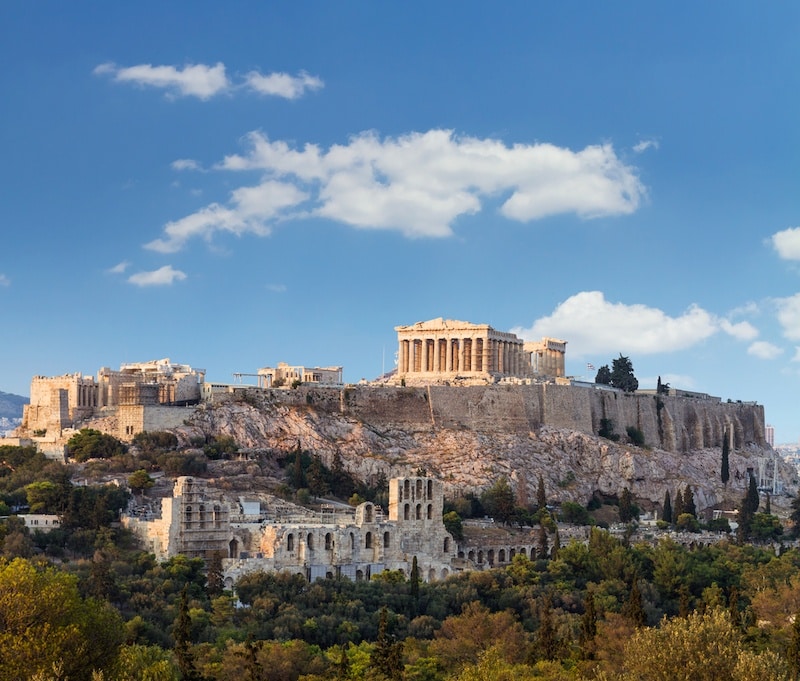 Home to an international airport and several other transportation links, especially tons of ferry routes, Athens is the bustling capital of Greece.

This ancient city is in Greece’s Attica region and has a recorded history that spans no fewer than 3,400 years. One of the oldest cities globally, Athens was a center of arts, science, and philosophy thousands of years ago. It’s often called the “birthplace of democracy” and the “cradle of Western civilization.”

Nowadays, the unbelievably rich history of Athens is visible in many locations around the city. Major tourist attractions are the world-famous Acropolis of Athens and the Daphni Monastery, both of which are UNESCO World Heritage Sites. Other landmarks include the Temple of Olympian Zeus, the National Archaeological Museum of Greece, Syntagma Square, and Mount Lycabettus.

Athens may just be Europe’s greatest destination for history and culture—its only close competitor for that title is Rome. After immersing yourself in Greek history in Athens, it’s quite easy to find relaxation, beaches and, if you haven’t got enough, even more, historic sites on Crete.

Crete is Greece’s biggest island. A super-popular destination on its own, this is a place where you could spend a week or more exploring beaches and ancient sites. Be aware that Crete is a pretty large island, though, and you might need a rental car or some kind of guided tour to get around and see sights beyond the coastal cities.

The two main cities on Crete are Chania and Heraklion, both of which have transportation connections to Athens. Much more about that below.

On Crete, you can spend your time enjoying epic Greek beaches like Vai Beach, Preveli Beach, or Elafonisi, visiting the superb Heraklion Archaeological Museum, seeing the Monastery of Arkadi hiking to Mount Ida, and so many other fun activities.

Additionally, because it’s so easily accessible from the Greek mainland, especially from the port of Piraeus, Crete is also one of the gateway islands to the glorious Cyclades island group. For example, you can go on a day trip from Crete to Mykonos—or stay longer in Mykonos—as well as travel to other beautiful islands like Santorini, Naxos, and Paros.

Ways To Travel Between Athens And Crete

Athens To Crete By Plane

If you’re short on time and would like to experience as much of Greece as possible, you can fly from Athens to Crete and save some time. This is an option that travel agents often recommend for reasons that range from wanting to maximize their own commissions to actually trying to help you make the most of your itinerary.

You can fly from the Athens International Airport (ATH) to the local Crete airports in Chania (CHQ) and Heraklion (HER). There are various flights—and prices—on offer from local carriers and budget airlines, such as Aegean Airlines, RyanAir, Volotea, and Sky Express.

When booking your flights from Athens to Crete or from Crete to Athens, remember that many fares do not include luggage fees. Additionally, they may also not be non-refundable when you cancel. Make sure to look into the conditions and fine print.

Athens To Crete By Ferry

Many crossings are overnight. For most comfort during an overnight ferry ride, you can usually book a cabin, too, although this option will double or even triple your ticket price.

Ferry prices vary significantly throughout the year and by company. They depend on the season (low, shoulder, or high), whether you are taking a car or not, the speed of the ferry, and the ticket class you choose.

Generally speaking, you can sometimes find Athens to Crete ferry prices as low as €30, but they can also be as high as €160 for a cabin crossing. These prices are just estimates, though, so be sure to check for real-time prices on websites like DirectFerries.com or FerryHopper.com.

Major companies that operate ferries between Athens and Crete are currently Minoan Lines, Anek Lines, and Blue Star Ferries. All have their own routes, times, and durations.

What Is The Main Ferry Port In Athens?

Although Athens has other ports like Rafina and Lavio, which have routes to several popular islands, the main port for ferries from Athens to Crete is Piraeus.

Located about 30 minutes from the Athens city center, this large port—one of the busiest passenger ports in Europe—has by far the most ferry connections to the Greek islands, including, of course, to Crete.

What Are The Main Ferry Ports In Crete?

There are two main ferry ports on the island of Crete, Chania, and Heraklion, both of which have numerous connections with the Greek mainland port of Piraeus. Heraklion, especially, is a busy port with multiple routes to other Greek islands like Santorini, Mykonos, and Naxos.

How Far Is Crete From Athens?

Depending on which port in Crete you’re traveling to, the distance from Athens (Piraeus) to Crete ranges from 315 km or 196 miles (Chania) and 330 km or 205 miles (Heraklion).

The most direct flight routes between Athens and Crete and essentially the same distance, at roughly 320 km or 200 miles.

How Long Does It Take To Get To Crete From Athens?

Flights from Athens to Crete are by far the fastest way to travel between both destinations in Greece. Direct flights are about 1 hour in the air, plus time to check-in at your departure airport and leave the arrival airport. That total duration shouldn’t be much more than 3 hours total.

On the other hand, ferries between Athens and Crete are significantly longer but offer a more scenic journey. An Athens to Crete ferry can last from about 6.5 hours with a fast hydrofoil to 11+ hours on a slow overnight ferry.

How Many Ferries Go From Piraeus To Crete Per Day?

The number of daily ferries between Piraeus and Crete varies depending on the season and some other factors. In general, though, there are at least two daily departures to both Chania and Heraklion, which usually increase in number in the busy summer season.

Can You Go On A Day Trip To Crete From Athens?

Technically, yes. In theory, it is possible to fly from Athens to Crete in the morning and back to Athens in the evening. In practice, however, this is absolutely not recommended. If you do this, you’ll spend half of your day trip in airports and planes, rather than exploring, sightseeing, and sipping on cocktails.

The beauty of a place like Crete also lies in its glorious evenings, sunset drinks, and morning strolls. We highly recommend spending at least one night in Crete—preferably two or three, though—before going back to Athens or moving on to islands like Santorini or Mykonos.

Additionally, a day trip from Crete to Athens, or vice versa, by ferry is impossible. As we mentioned above in this Athens and Crete transportation guide, the fastest ferry is about 6.5 hours. To get somewhere and back will, therefore, take at least 11 hours. Unless your job is literally ferry captain, you don’t want to do that.