Weekly updates from Truckstop.com and DAT both showed measures of demand decline for spot market loads in the most recent week. Big-picture, Truckstop.com and FTR Transportation Intelligence’s Market Demand Index snapshot continued to show increases in truck posts on its load board, with load posts falling overall after rising slightly the prior week.

Volume of those load posts, Truckstop.com noted, was more than 18% below the same 2021 week but about 83% above the five-year average for the week. If volume were to hold steady, the company added, it would remain negative year over year (compared to 2021) through June. 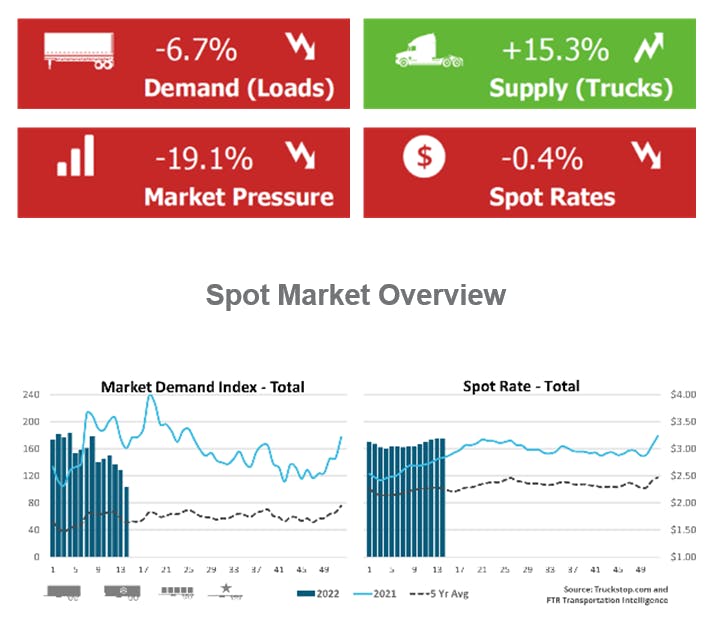 Loads were up slightly in the Southeast and flat in the South Central region but were down sharply in all other regions. Truck postings increased 15.3%, and the Market Demand Index — the ratio of loads to trucks in the Truckstop.com system — fell to its lowest level since December 2020.

Flatbed continued to be a relative “bright spot” when it comes to rates holding up against the rise in fuel, as both reefer and van continued to lose ground at an accelerated pace. Flatbed spot rates posted another record, gaining another 1.3 cents all-in. Excluding the impact of fuel, though, underlying linehaul was down by about 10 cents, Truckstop.com said.

Reefer and van all-in rates on average lost 3 and 7 cents respectively, yet given fuel’s 7-cent national decline last week, the week-to-week losses might not register fully as a profit negative overall.

Texas van freight will be a market to watch this week, particularly given border-blockade activity on the Mexican side and increased inspections of incoming rigs on the U.S. side creating a freight chokepoint.

While seaports, too, will be a storyline to watch all summer, DAT said, more van loads are coming across the southern border into Texas from Mexico. The van load-to-truck ratio in Laredo averaged 16.2 over last seven days, much higher than the paltry 3.4 national average. McAllen averaged 24.1. Spot van loads from Laredo to Dallas averaged $3.66 per mile last week, 11 cents better than the March average, according to DAT RateView. McAllen to Dallas averaged $3.13 a mile.

TravelCenters of America announced earlier this month that it has completed the previously announced acquisition of two travel center locations for $45 million.

Located along the Interstate 81 corridor in Virginia, Petro Raphine (also known as White’s Travel Center) and TA Lexington have been successful TA franchise locations since 2011, the company says.

“With this year’s CVSA RoadCheck coming up fast, it’s a great time for drivers to stop in at Love’s Truck Care or Speedco locations for a checkup,” said Gary Price, executive vice president of truck care, hospitality and facility maintenance for Love’s. “Love’s has over 420 locations in 41 states that are ready to serve drivers and help get them back on the road quickly and safely, and right now drivers can get $1 TirePass inspections and $10 off DOT inspections.”

The new Speedco locations can be found at the following addresses: