Casting Announced for The Pirates of Penzance — Utah Shakespeare Festival 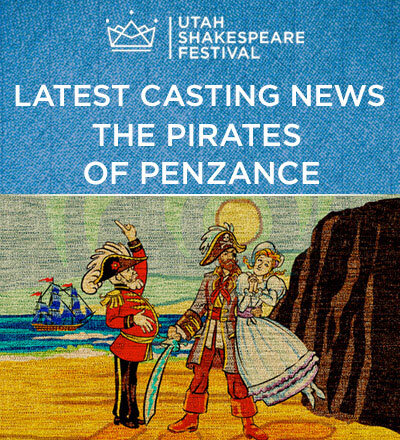 Five talented actors will be taking on the major roles in The Pirates of Penzance when it hits the stage June 25 at the Utah Shakespeare Festival. They will sing and dance their way into our hearts as the largely unsuccessful but kind-hearted pirate king, his duty-bound apprentice and his nursery maid, and a befuddled major-general and his lovely and high-spirited ward. They (and a chorus of sentimental pirates, bumbling policemen, and giggling maidens) will bring to colorful life this family-friendly comedic operetta by W. S. Gilbert and Arthur Sullivan.

“As my first time at the Utah Shakespeare Festival, I am beyond excited to work with this incredible group of artists who all offer unique perspectives and will bring a fresh take to The Pirates of Penzance,” said director Cassie Abate as she began rehearsals May 10.

Rhett Guter will be returning to the Festival this year as the Pirate King. Past Festival performances include Peter in Peter and the Starcather (2013), Tommy Djilas in The Music Man (2011), Flute in A Midsummer Night’s Dream (2011), Peter in The Diary of Anne Frank (2010), Lysimachus in Pericles (2010) and many others. He has appeared in regional theatre across the country, received BFA and BS degrees from Southern Utah University, and is a member of Actors’ Equity Association.

Richard R. Henry is making his debut at the Festival in the role of Major-General Stanley, a character famous for his full-speed rendition of “I Am the Very Model of a Modern Major-General.” He has appeared off-Broadway in Drift at New World Stage and Two Gentlemen of Verona the Musical at The Public. He has worked at numerous regional theatres as well as in the national tours of Urinetown, Sweet Charity, Man of La Mancha, and Jesus Christ Superstar. He is a member of Actors’ Equity Association and the Screen Actors Guild/American Federation of Television and Radio Artists.

Cecilia Iole will also be debuting at the Festival, playing the role of Mabel, the Major-General’s youngest ward and Frederic’s love-interest. She has performed across the country in such roles as Rapunzel in Into the Woods at Writers Theatre (directed by Garry Griffin); Johanna in Sweeney Todd at Paramount Theatre; Cunegonde in Candide at Clarence Brown Theatre; Ariel in The Little Mermaid; and Cosette in Les Misérables.

Jalon Matthews will be appearing for his first time at the Festival as Frederic, the duty-bound apprentice pirate. He has performed as Sebastian in Disney’s The Little Mermaid at Musical Theatre West, Seymour in Little Shop of Horrors at PCPA, Bobby in Company at University of California–Irvine, and more. He holds a BA in acting degree from Pepperdine University and an MFA in acting from the University of California–Irvine.

Fifteen other actors will join these five to complete this charmingly silly operetta. They are: