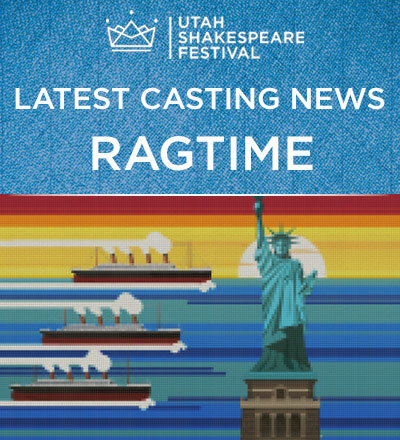 “This is a dream ensemble,” said director Brian Vaughn as he began rehearsals last week for the Utah Shakespeare Festival’s 2021 production of Ragtime. “I can’t wait for them to share their remarkable talent with our audience.”

Ragtime is, indeed, a large production. It is supported by twenty-nine amazing actors playing over sixty roles. Yet, there are three families and cultures represented by five astonishingly talented actors who will anchor much of the show, and most of them will be familiar to Festival audiences.

Ezekiel Andrew will be taking on the role of Coalhouse Walker Jr., a talented and proud African-American musician who believes that his ragtime music will help him achieve the American dream. Andrew appeared at the Festival in 2018 as Jim in Big River and in the ensemble of The Conclusion of Henry VI Part One. He has appeared in numerous regional theatres and received several awards for his portrayal of Ragtime’s Coalhouse Walker Jr. in Theatre under the Stars in Houston, Texas. He is a member of Actors’ Equity Association.

Aaron Galligan-Stierle will play Tateh, a poor Jewish immigrant who comes to America to make a better life for himself and his daughter. Galligan-Stierle has appeared at the Festival in eight previous seasons, playing such roles as Dromio of Syracuse in The Comedy of Errors, Smee in Peter and the Starcatcher, and Clown #2 in The 39 Steps. He has also appeared on Broadway as Monsieur Andre in The Phantom of the Opera, Henry Ford in Ragtime, and Papa Who in The Grinch, and in theatres across the country. He is a member of Actors’ Equity Association.

Perry Ojeda, who is new to the Festival this year, will be playing Father, a wealthy businessman and head of a household which seems to have achieved the American dream. Ojeda has appeared on Broadway in On the Town, Blood Brothers, and Imaginary Friends, as well as in numerous roles off-Broadway, regionally, and on television, including roles in Desperate Housewives, All My Children, Guiding Light, One Life to Live, and Days of Our Lives. He is a member of Actors’ Equity Association.

Melinda Pfundstein is well-known to Festival audiences as both a director and actor. She is appearing this year as Mother, the heart of her and Father’s family. Favorite acting roles at the Festival include Constance in King John, Hermione in A Winter’s Tale, Roxane in Cyrano de Bergerac, Kate in The Taming of the Shrew, Eliza Doolittle in My Fair Lady, and Fantine in Les Misérables. She also directed The Book of Will (2019) and The Merchant of Venice (2018). She is the founding executive director of StateraArts. She is a member of Actors’ Equity Association.

Daria Pilar Redus is also returning to the Festival this year. She will be performing the role of Sarah, a young, beautiful, and innocent woman who falls in love with Coalhouse. Redus has worked at the Festival in the past as Cassius in the 2021 Julius Caesar education “tour” (which was presented entirely online), in the ensemble of Big River in 2018, and as a Featured Performer in The Greenshow in 2018. She recently appeared as Sandy Cheeks in the first national tour of The Spongebob Musical: Broadway’s Award Winning Hit!

Other members of the “dream ensemble” are:

·      Rhett Guter as Houdini and Ensemble

·      Chris Mixon as Grandfather and Ensemble