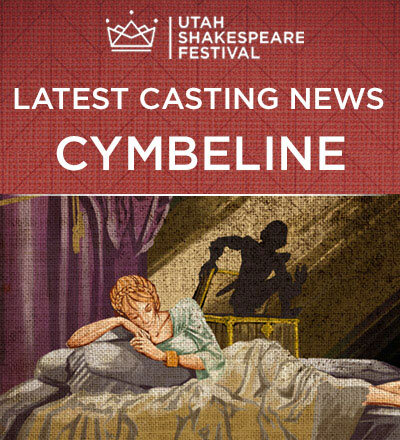 What happens when you take a show like Shakespeare’s Cymbeline with over twenty characters and numerous locations, and you stage it in the intimate Anes Studio Theatre with only eight actors? Not surprisingly, if you have eight actors with the talent of those cast for this summer’s production at the Utah Shakespeare Festival, you have magic.

Cymbeline has been called a fairy tale, a classic story book, full of wonderment and charm; and these actors are excited to be working at the Festival and bringing this Shakespearean romance to the Anes theatre stage. “Over the years, I’ve had many friends work at the Festival as actors and designers, and I’ve always listened to their stories and seen their photos with awe and just a little envy.” said actor Howard Leder. “The chance to come here this summer—and make my debut with the Festival—is really kind of a dream come true.”

The eight actors in Cymbeline are:

Jasmine Bracey will be making her Festival debut, playing Belarius. She has worked in many other regional theatres, including Goodman Theatre, Steppenwolf Theatre Company, Chicago Shakespeare Theater, American Blues Theater, Berkeley Repertory Theatre, Alley Theatre, Guthrie Theater, Resident Ensemble Players, and The Acting Company. She has also appeared in the television series New Amsterdam, and Chicago P.D. She is a member of Actors’ Equity Association.

Afua Busia is also at the Festival for her first time, playing Pisanio, British Soldier, Musician, and other roles in Cymbeline. She has also appeared as Ama in School Girls at Berkeley Rep, Mary in A Christmas Carol at A.C.T., Grace in An Octoroon at Berkley Rep, and others. She earned her M.F.A. from American Conservatory Theater and is a member of Actors’ Equity Association.

Yao Dogbe is playing the roles of Posthumus and Cloten in his first appearance at the Festival. Regionally, he has appeared in Intimate Apparel at Northlight Theatre, Fences at American Players Theatre, Homebound and Ohio State Murders at Round House Theatre, Macbeth at Chicago Shakespeare Theater, and many others. In 2017 he was listed as one of Houston’s best actors for his performance as Booth in Topdog/Underdog. He is an Equity Membership Candidate.

Josh Innerst, who is playing Iachimo, has appeared at the Festival in over a dozen roles, most recently as Earl of Suffolk and Earl of Salisbury in Henry VI Part One, Gratiano in The Merchant of Venice, and Robert in The Merry Wives of Windsor in 2018. He has also worked in theatres across the country including Cleveland Playhouse, Colorado Shakespeare Festival, and American Shakespeare Festival. He has also done extensive audiobook and commercial voiceover work. He is a member of Actors’ Equity Association.

Howard Leder is appearing for his first time at the Festival this season. He will play the roles of Philario and Ghostly Father. Work at other theatres has included Beverly Hills Playhouse (Duet for One), Actors Rep of Simi Valley (Our Country’s Good), Oberlin College and Conservatory (Antigone, Waiting for Godot, The Beggar’s Opera, Time and the Conways, The Marriage of Figaro, and The Yeomen of the Guard). He has worked as a film and television editor for This Is Us (NBC), The Newsroom and Big Love (HBO), and others.

Tiffany Scott last worked at the Festival in 2005 when she played Juliet in Romeo and Juliet and Helena in A Midsummer Night’s Dream. This year she is playing Queen and Arviragus in Cymbeline. Other theatres she has worked at include National Theatre D.C., Chicago Shakespeare Theater, Berkeley Repertory, McCarter Theatre Center, Seattle Repertory, Goodman Theatre, American Players Theatre, and Illinois Shakespeare Theatre. She also has appeared on television in Chicago Med. She is a member of Actors’ Equity Association.

Constance V Swain is making her Festival debut this summer as Imogen in Cymbeline. Regionally she has performed in such plays as Caesar and Cleopatra, Antigone, The Comedy of Errors, Twelfth Night, Grimm Lives, and the world premiere musical Willard Suitcases. She also played the role of Zoe in the movie To Love and to Cherish. She was honored with the 2019 Broadway Regional Award for Best Actor in a Play.

Jeremy Thompson is returning to the Festival this year as Caius Lucius and Frenchman. Previously at the Festival he has played Horatio in Hamlet, Seyton in Macbeth, Philiste in The Liar, Lodovico/Soldier in Othello, Brutus in the Julius Caesar education tour, and Narrator in the Every Brilliant Thing tour. He has also worked at the Oregon Shakespeaer Festival, Island Shakespeare Festival, Book-It Repertory Theatre, and more.