Announcing the Cast of The Greenshow — Utah Shakespeare Festival 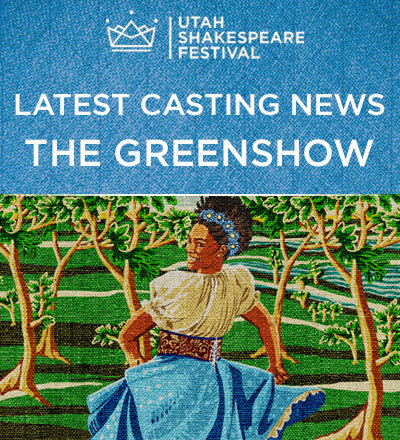 Four new faces and four faces familiar to Utah Shakespeare Festival audiences will make up the 2021 cast of the popular pre-play entertainment, The Greenshow. The free and fun show opens on June 21 and plays Mondays to Saturdays through September 11, starting at 7:10.

“The Greenshow will return with many familiar faces from last year, and it will be a beautiful reunion to be in the rehearsal hall with them again in addition to some new blood!” said director Britannia Howe. “These actors are some of the hardest working artists in the business. Not only do they dance, act, and sing their faces off every night in The Greenshow, but then they have fifteen minutes to run to change costumes and perform in the mainstage shows. They are hardworking, talented to boot, and such team players.”

These talented and hard-working artists are:

Raven Flynn (also in the ensemble of Ragtime) appears at the Festival courtesy of the Southern Utah University Fellowship Program. This is her first time at the Festival, but she has appeared as Ariel in Footloose at the Playmill Theatre in West Yellowstone and in Seven Brides for Seven Brother and Tarzan at Playmill Theatre. She graduated from SUU with a BFA in theatre arts this spring.

Sophia Guerrero (also in the ensemble of The Pirates of Penzance) is celebrating her first year working at the Festival this summer. She has played Jane in Tarzan at the Hale Center Theatre in Sandy, Utah and Miss Dorothy in Thoroughly Modern Millie at the Hale Centre Theatre in Orem, Utah. She has also appeared at Brigham Young University where she was the senior finalist for the BYU Outstanding Theatre Award.

Peter Reid Lambert (also in the ensemble of both The Pirates of Penzance and Ragtime) is working at the Festival for his first time. He has appeared off-Broadway as Thomas Briggs in An Enchanted April and originated the role of Johnny in Beulah Land. He has also played Freddy Benson in Dirty Rotten Scoundrels, Davey in Newsies, Ernst in Cabaret, Eric Liddle in Chariots of First, and more.

Kat Lee (also in the ensemble of Ragtime) appeared at the Festival as the Narrator in the Every Brilliant Thing very successful educational tour. She has also played Lorrell Robinson in Dreamgirls at Short North Stage and Sophie Sheridan in Mamma Mia! and The Witch in Big Fish at Otterbein University. She received her BFA in musical theatre from Otterbein University in 2019.

Connor Padilla (also playing various roles in Pericles and The Pirates of Penzance) appeared at the Festival in 2019 as Gad in Joseph and the Amazing Technicolor Dreamcoat and Featured Performer in The Greenshow. He has worked at a number of regional theatres including Taffety Punk Theatre Company in Washington, D.C., Annapolis Shakespeare Theatre, Orlando Shakespeare Theater, Orlando Repertory Theatre, Winter Garden Theatre, and Theater Lab.

Trey Plutnicki (also in the ensembles of both Ragtime and The Pirates of Penzance) was at the Festival in the ensemble of Joseph and the Amazing Technicolor Dreamcoat and Featured Performer in The Greenshow in 2019 and Mercutio/Friar Laurence in the education tour of Romeo and Juliet in 2020. He has also played at other theatres as Ensemble in All Is Calm, Ali Hakim in Oklahoma!, and Woodstock in Snoopy! The Musical.

Olivia Rylan Sham (also in the ensemble of Ragtime) is working at the Festival for the first time. She is appearing courtesy of the Southern Utah University Fellowship Program. She has performed at the Simonfest Theatre Company as Audrey in Little Shop of Horrors and Nora in Brighton Beach Memoirs, as well as various roles at Southern Utah University and Patricia in The Last Yankee at Universitatea Babes Bolyai in Cluj, Romania.

André Spathelf-Sanders (also in the ensembles of both The Pirates of Penzance and Ragtime) is celebrating his third year at the Festival and as a Featured Performer in The Greenshow. He has also played in the ensemble of Big River and as Asher and the Butler in Joseph and the Amazing Technicolor Dreamcoat. He has choreographed and danced for other theatres, including Otterbein University where he received a BFA in musical theatre and dance.