Announcing the Cast of The Comedy of Errors — Utah Shakespeare Festival 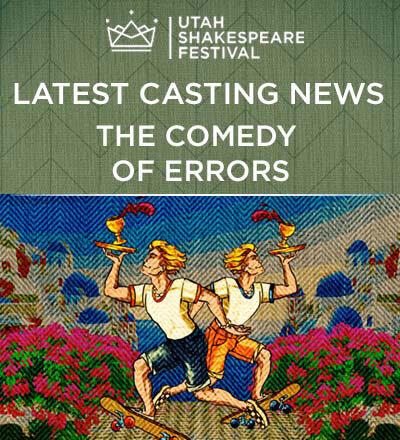 Three faces familiar to audiences and one actor making his debut at the Utah Shakespeare Festival will lead the celebration in this season’s 1970s Greek island-themed version of The Comedy of Errors which takes the Engelstad Shakespeare Theatre stage beginning June 23.

“I am very excited to be working with Festival favorite Michael Doherty again after our collaborations on The Foreigner and Every Brilliant Thing at the Festival,” said director Vincent J. Cardinal. “It’s a terrific cast of Festival veterans and newcomers who are ready to have great fun sharing one of Shakespeare’s silliest plays.”

Michael Doherty (Dromio of Syracuse) first appeared at the Festival in 2015 as Lord Fancourt Babberley in Charley’s Aunt, Speed in The Two Gentlemen of Verono, and Tranio in The Taming of the Shrew and in 2018 as Charlie Baker in The Foreigner and Tom Sawyer in Big River. However, he is probably most remembered for his performance as the Narrator in the one-man show Every Brilliant Thing in 2019. He has also appeared off-Broadway in Dublin by Lamplight and in various regional theatres across the country. He is a member of Actors’ Equity Association.

Mauricio Miranda (Antipholus of Syracuse) appeared at the Festival in 2019 as Curio in Twelfth Night and numerous roles in The Book of Will, including Ralph Crane. He has also played John Proctor in The Crucible and Tom Joad in The Grapes of Wrath at Connecticut Rep and various roles at New Frontiers International, Indiana Rep, Kansas City Rep, and Phoenix Theatre. He is an Equity Membership Candidate.

Andrew Plinio (Dromio of Ephesus) is new to the Festival this year, but he has worked at numerous other theatres including playing the role of Patrick in The Radio City Christmas Spectacular and appearances as Oliver in As You Like It and Sebastian in Twelfth Night at the London Academy of Music and Performing Arts and several roles at the University of Michigan. He also appeared on television as Billy in HBO’s The Young Pope.

Marco Antonio Vega (Antipholus of Ephesus) has appeared in numerous roles at the Festival the past few years including Marco/Puck in William Shakespeare’s Long Lost First Play (Abridged), Demetrius in A Midsummer Night’s Dream, Bardolph in Henry V and Henry IV Part Two, Hugh Oatcake in Much Ado about Nothing, and Lord of Burgundy in King Lear. He is also the recipient of the Festival’s Michael and Jan Finlayson Acting Award.

Fourteen other actors will join these four to inhabit a madcap Greek island paradise, ala Mamma Mia! They are:

·      Lena Conatser as Luce and Messenger

·      Trent Dahlin as Balthazar and Merchant

·      Sarah Shippobotham as Abbess and Emilia