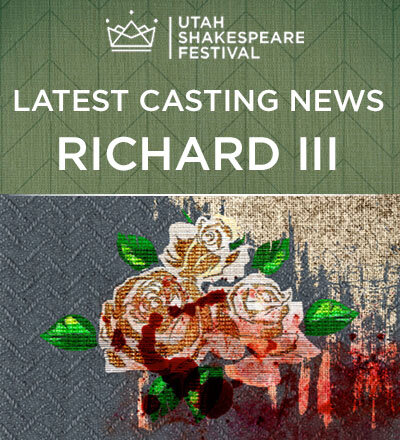 “I am beyond excited for this cast to be among the first to bring live theatre back! This is a great group of artists I have known of and admired for many years,” said director Cameron Knight as the casting for the Utah Shakespeare Festival’s production of Richard III was announced. “I am honored and excited to collaborate with them, audiences are going to deeply enjoy this group!”

This murderous and dark play will include nearly twenty actors, but those playing the roles of Richard and the four major women are of particular interest: Aidan O’Reilly as Richard (the murderous duke, then king); Desirée Mee Jung as Queen Elizabeth, Melinda Pfundstein as Margaret, and Sarah Shippobotham as the Duchess of York (three noble women who strongly condemn Richard); and Sarah Suzuki as Lady Anne (whom Richard makes a widow then woos her to be his bride).

The actors arrived at the Festival and started rehearsals May 10; the play will take the stage June 22.

Taking on the title role of the manipulative Richard will be a newcomer to the Festival, Aidan O’Reilly, who was trained at the Royal Academy of Dramatic Art (RADA) and appears here as part of a collaboration between RADA and the Festival. He has appeared in numerous theatres across the country and abroad, including American Shakespeare Center, Avalon Players, Marin Shakespeare Company, City Lights Theatre Company, and Prague Shakespeare Company. He is a member of Actors’ Equity Association.

Also new to the Festival this year is Desirée Mee Jung who will be playing Elizabeth, queen to King Edward IV. Mee Jung has appeared at various other theatres, such as Alley Theatre, South Coast Rep, A Noise Within, Colorado Shakespeare Festival, Antaeus Theatre Company, Curious Theatre Company, LA Theatreworks, and The 6th Act. She is also a member of both the Screen Actors Guild and Actors’ Equity Association.

Long-time Festival favorite Melinda Pfundstein will be returning to the Festival to play Margaret, widow of King Henry VI and mother of the murdered Prince Edward. Pfundstein has appeared in nearly forty roles at the Festival since 1996, including Kate in The Taming of the Shrew, Olivia in Twelfth Night, Fantine in Les Misérables, and Miss Jane Bennett in Pride and Prejudice. She also directed The Book of Will (2019) and The Merchant of Venice (2018). She is a member of Actors’ Equity Association.

Sarah Shippobotham returns to the Festival after playing Eleanor and other roles in The Conclusion of Henry VI: Parts Two and Three in 2019. This year she will take on the role of Duchess of York, the mother of Richard. A full professor at the University of Utah, Shippobotham has worked as an actress and voice and dialect coach in numerous theatres. She is a member of the Voice and Speech Trainers Association and the National Alliance of Acting Teachers.

Sarah Suzuki makes her debut at the Festival as Lady Anne. She has appeared at the American Shakespeare Center, 5th Floor Theater Company, Dixon Place, Target Margin Theatre Company, and many others. Film work includes The Surprise Party, The Elucidation of Dr. Park, Neighborly Love, and Teeth Bait.

Other actors in Richard III are:

·      Cordell Cole as Marquess of Dorset, Earl of Richmond

·      Aaron-Galligan-Stierle as Duke of Clarence and Bishop of Ely